You are here: Home › Hiking and Outdoors › Trip Report for Park Butte 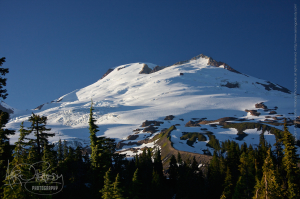 We met, as planned, and were on the road a little early. Traffic was virtually non-existent and, despite a little misreading of the printed directions, we arrived at the trailhead with no trouble and in good time. There were more vehicles up there than I think we had planned on seeing, but because that spot is the jumping off point for a number of trails it didn’t mean that the trail would be crowded, and it wasn’t! Part of that probably had to do with the Forest Service letting people know over the phone and on their website that the trail had quite a bit of snow on it.

After getting ourselves set we headed up the trail and were hiking by a little before noon. The first part of the trail was very very easy, winding gently through Schriebers Meadow. Despite the warning in the book we did not encounter many mosquitoes at this point. From here we climbed a bit to the stone-strewn majesty which is Rocky Creek. We lost the trail briefly around here as the creek had decided to make use of it for its bed. Having located the true path we built a couple of cairns and continued on.

Past the this point the trail began climbing through beautiful old forests, winding it’s way from grove to grove and stand to stand. We indulged in a bit of adventuresomeness by crossing a naturally built bridge (a fallen tree) instead of staying with the trail and continued up. Switchbacks carried us higher and soon we began to see patches of snow. Before too long we we were seeing more than just patches. Then we reached Moritz Meadow.

By now we were hiking on nothing but snow. I don’t rightly know how deep it was, but I can tell you that it was at least two feet in the open and probably deeper often enough. A little ways through the meadow we made another rest stop and had some more food. We made the most of the views here, with the valleys opened up behind us and Baker hove into view. After a break and stretch we continued on. Up until now there had been little doubt as to where the trail lead, but at this point we had to start making guesses. At times we had others’ tracks to guide us, but more often we were forging our own way. This continued—sometimes on our own recognizance, sometimes in the footsteps of others—until we reached the junction with the Railroad Grade Trail. Here it got tricky.

It seemed that everyone on the trail that day had decided on this spur trail rather than the trickier ascent to the Butte. It makes sense. That trail was marked and relatively free of snow after the meadow behind and below. I think the Forest Service may have been trying to encourage that since no signs for our destination were to be found. Right about this time, though, I caught site of the roof of the distant lookout tower and we were able to orient off of that. The next several hours were ones of grueling pathfinding as we sought out the best way to get to where we needed to get. We went high and we went low, always headed on though too often by the harder than it looked way. We have no idea where the trail actually was, even now, but it is sure to have been somewhere easier than where we were. Much hard work got us around or through a bowl to where we could start some real climbing. Eventually, after what I would have said was several more hours only there aren’t enough in the day, we struggled up to the lookout and our reward—rest, food, and views. By this point we should have covered roughly 3¾ miles, and it had only taken us five hours!

We spent an hour at the tower, airing out our boots, socks, and feet, and soaking in the incredible panorama laid out before and all around us. 6:00 pm came around all too soon, though, and we knew that if we wanted to get back to the trailhead by 9:00 we would need to get going. We said goodbye to the nice couple who were spending the night at the tower and began down.

While going down is ten times easier than going up, especially through deep snow, it is also ten times more exhilarating (Mike would say terrifying). We all ended up with some ice burns from times when we were forced to use our skin to arrest downward plummets, and Mike got soaked to a fare thee well from doing too much down in a supine posture. We followed an entirely different path this time, which saved is some distance and effort. By the time we had traversed Moritz Meadow and were back to the trees I realized the error of leaving my regular glasses in the car. Sun glasses and forest approaching twilight do not make for the best visibility. Also because of the fleeing light I was not able to get some of the photos I had planned on during the trip up (I do most of my photo making on the downslope). Down, down, down we went, back across Rocky Creek where we refreshed ourselves with glacial meltwater, and on down again. Schriebers Meadow again and THERE were all the mosquitoes. Finally back to the car and on the road home by 9:30. At this point my GPS let us know that we had hiked this 7.5 mile trail in 8.65. Whee!

There’s little left to say, by this point. We were back to my apartment by 11:45 and all said our goodbyes. Justin and I agreed that further longer trips like this will call for an earlier departure time than 9:00 am, especially as the days shorten from here on. We also think a trip back up to the Butte is in order, bringing along a few more people, and planning to stay the night. I want to thank Mike and Justin for accompanying me on this adventure. They were boon companions and I could not have asked for better conversations or more willing partners.

This site uses Akismet to reduce spam. Learn how your comment data is processed.