You are here: Home › About me 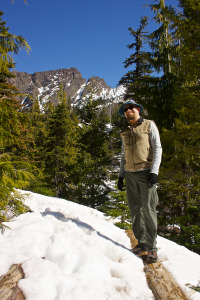 So this is where you get to find out about Aaron. I’m a voracious reader (I tend to read 100 to 110 books a year), an avid hiker, working on becoming a more frequent camper and backpacker, and an introvert thriving in an extroverted field. I enjoy exploring wilderness areas and seeing what’s around the next bend of the trail or beyond the next mountain or valley. I’m also a loquacious writer, as you’re about to find out . . .

I was born in a suburb of Dayton, Ohio, named Huber Heights, on March 8th, 1977. My lived there until I was seven or eight years old and then moved north to the town of Amherst. My parents are Gerry and Diane and I have a two-years-younger sister named Megan. I lived in Amherst until going off to college in Syracuse, New York. Growing up I went to Saint Joseph’s Elementary School and Lorain Catholic High School. I was involved in Boy Scouts (Troop 427), Sandstone Summer Theatre, my high school’s drama club and worked at a True Value hardware store. I spent as much of my time out of doors as I could and developed a ferocious reading habit, which remains with me to this day. I’ve always had a hyperactive imagination and can quite easily lose myself in worlds of fantasy for hours on end.

In college I studied Design/Technical Theatre (class of ’99), with a focus in Lighting Design. During that time I had my first introduction to computers and ended up getting hooked on them. During these four years I worked for a company named Event Productions doing lighting, sound and staging on and off campus. Midway through my senior year I met a girl named Lauren, who eventually became my wife.

After graduating I moved back to Amherst with the intention of finding work in the Columbus area. Lauren had been accepted to graduate school at Ohio University and I wanted to live near her. As things worked out she wasn’t happy with being back in school and decided that she wasn’t going to stay there. Not long after that I was offered a web/graphic design job in Cleveland, and ultimately we decided to live together.

We lived and worked in Cleveland for a little over four years, during that time living in a couple of different places, adopting four cats, and getting married. Less than two weeks after the Christmas of ’03 my job was outsourced to India and I was fired. This wasn’t as big of a deal as it could have been since I was planning to quit that job in a few months so we could put into effect our plan to move out the Seattle, although it did rob me of the opportunity to tell that company what I really thought of them.

At the end of March ’04 we packed everything we owned into a moving van, a trailer and our pickup truck and pulled out of Ohio, waving goodbye to my family. Four days later we crossed Lake Washington into Seattle. We quickly found jobs—Lauren at a Borders bookstore and me doing contract web design/development. My career as a freelance designer lasted roughly four months, with over a year of unemployment and odd jobs to follow. Lauren’s employment at Borders lasted through three different stores and came to a close in March ’09. During that time we lived in two different Seattle neighborhoods, bought a house in Everett, and adopted a puppy.

In October ’05 I began work at the Apple Store University Village near the University of Washington. I spent a couple of months as a part time Mac Specialist before being promoted to full time. After about six months of that I was promoted to the role of Business Consultant, a job title I held for almost one year. From that job I moved into the position of Creative, which is Apple’s personal trainer role. Eventually I was promoted to the Lead Creative position, a job which I hold to this day.

Beginning in June, 2010, and culminating in September, 2010, Lauren and I filed for divorce.

In January, 2011, I moved into an Apartment in Edmonds, my first time living completely on my own. By this time I had three cats and two dogs, all of whom, it turns out, were destined to come to Edmonds with me. In the intervening years two of the cats have passed on (Wyoming and Kiara), leaving me with Pixel, Hudson, and Samantha.

On the work front I have been blessed with several unique opportunities, including being involved in the opening of our first store in Spokane, WA, and our first store in Hong Kong. On top of that I have been able to travel to Cupertino and Chicago numerous times at my employer’s behest, which has turned me into something of a savvy business traveler.

For a couple of years, looking for a hobby, I took up 14th and 15th century Italian longsword (based on a manuscript entitled Fior di Battaglia (‘Flower of Battle’) by Fiore dei Liberi). It was splendid fun, but eventually I put it on hold do to time and expense commitments. I still have all the equipment and hope to get back to it some day.

In early 2014, after years (being honest, decades) of lackadaisical outdoorsmanship I decided that it was time to get off of my [widening] ass and put boots to the hiking trails I claimed to love. Surprising to no one more than myself I stuck with it, hiking a little over 100 miles that year. Even more surprising was when I totaled up 2015 and saw that I had hiked over 160 miles, including two backpacking trips (one very nearly disastrous). At this point I simply don’t know what to expect from 2016, but I’m excited to see.

It would be enough for me to lay claim my title of Outdoorsman™ just with the hiking I’ve been doing, but about a year ago I also got bitten by a bug I call “giving back to community”. In December, 2014, after not volunteering my time in any way, shape, or form since high school, I went out for a day and put in seven hours of trail building with Washington Trails Association. In 2015 I volunteered for over 70 hours with WTA, including leading volunteer events with groups of 10+ coworkers twice! For 2016 I’m planning more of the same and intend on going on one of their Volunteer Vacations (eight-day-long camping trip which includes five days of trail building). I’m gonna be so sore! It’s gonna be amazing!

Outside of work, and in the little free time that I have amongst all of the books I have on my reading list, I watch TV shows and movies—some old, some new—through the auspices of Netflix and Hulu, and spend time being entertained and exasperated by the two dogs and two cats who share my living space. That brings us up to the present time. If you’ve managed to make it all the way down here all I can say is thanks for sticking with it. Good job!