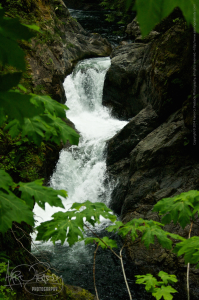 A recent mudslide had taken out portions of the main trail, including the viewpoint for the lower falls, so we approached Twin Falls from the opposite direction, starting from Olallie State Park. This cut off about a mile of the hike, though the elevation gain remained about the same. It also turned the trail upside down as we hiked down hill toward the falls.

Because of the change in the trail it was not as crowded as it could have been. There were still plenty of people around, but no where near as many as we encountered several weeks before at Rattlesnake Ledge. One of the groups of people at the bridge was a wedding party made up of folks of Eastern European heritage. We got there after they had already had the ceremony but it looked like it would have been beautiful.

We had some nice views of the upper falls from two different viewpoints and got a chance to spend a couple of hours on a nice little trail. The weather was a bright overcast and a bit cool, which was just right.

A smaller group of us proceeded from Olallie State Park deeper into Mount Baker-Snoqualmie National Forest to get to the next trailhead. A short jaunt back on I-90 and a little bit of paved road got us to where the road turned to dirt and gravel, henceforth known as my happy place™. About ten miles of mountain and forest driving got us to the trailhead along the middle fork of the Snoqualmie River. We crossed the beautiful, volunteer-built bridge, and headed upstream.

For a while the trail lead along the river but then it dived deeper into the forest. The terrain varied from more open woodlands to heavily brush-grown. Views opened up at different times to give us looks at some of the rocky, mountain slopes to our sides. Here and there we got to cross small and medium rivulets. In several places we got to experience old rock slides that had carved channels down the mountain slopes. In these spots the streams ran glass-clear over rock and gravel beds.

A larger one of these spots is where we decided to stop and rest before turning around. Here the rocks were larger, the water more plentiful, and the fallen trees quite massive. The sound of the falling water was a constant babble and burble as it ricocheted from rock to rock and spilled in countless paths down the hillside. Behind us the rockslide led up into sunlit trees, while ahead of us we could see a nearby mountain ridge. It was a wonderful spot for a rest and snack and the sun obliged our reverie by choosing this moment to emerge and turn the white sky blue.

After a well-deserved rest we turned out feet back toward the river and home. Though the way in was by no means steep, the gentle grade now lent itself to our swift progress and we arrived back at the bridge quickly. A last lingering moment here, enjoying the risk of the river and the sun on our heads sufficed before we got back in the car and shaped our course for home.

This site uses Akismet to reduce spam. Learn how your comment data is processed.